Taste and sip from L.A.’s best restaurants, wineries, and more.

The new Pasadena location is in a location that is soon to be joined by Five Guys Burgers.

The Pasadena location makes several locations that are

On Sept 2, at the Pasadena location, from 6am to 9pm get a free donut.

Guests can receive a free raised glazed donut from 6 a.m.-noon;

From noon to 9pm guests will need to follow Randy’s Donuts @randysdonutsla on Instagram to receive a free raised glazed donut.

Name something more perfect than a classic glazed from Randy’s!?

View here in the original format.

Mr Kennedy makes some very legitimate points that should be taken seriously.  Many are very upset and the consequences of actions could lead to embroil the city into a crises that could make the climate for healing and moving for possible and make it very difficult. Living a few blocks away from the scene is not only disturbing but concerning.  And the need for Pasadena Police Dept oversight and community involvement is critical.  Yes, there are officers that make mistakes and yes there are officers who react to situations.  I encourage all community members to participate in the Citizen Police Academy this is a crucial program to learn how the dept works and the challenges it faces.  This incident must be investigated swiftly.  How is it that the officer with the body camera was able to turn off the camera?  Why is it taking so long to release footage from and a preliminary report of the incident?  The incident took place on August 15, 2020, is there a deadline being set by those who are in charge?  Are the mayor and city manager helping to expedite? Is the city council putting pressure on the those who can move this forward putting pressure?   Lots of questions, hopefully there will be answers soon.

I have viewed what videos and photographs that were shared with me by City Manager Steve Mermell of the Offìcer-Involved Shooting of Mr. Anthony McClain that took place on Saturday, 15 August. Mr. McClain’s death is tragic.

Some may seek to demean Mr. McClain to dehumanize his existence. But the fair-minded will acknowledge Mr. McClain’s humanity and deep connections to Pasadena. Mr. McClain literally may have hundreds of relatives in The Greater Pasadena Area. Mr. McClain leaves behind 2 young children. I have spoken to Mr. McClain’s 89-year-old grandmother and his stepmother. Quite naturally, both are upset and desire a comprehensive investigation of what happened. I provide my heartfelt condolences to Mr. Anthony McClain’s Family.

The facts surrounding the shooting are unfortunate and extremely troubling to me. There are many unanswered questions and the shooting, policies of the police department, body-worn cameras, and training of our police personnel must undergo thorough and impartial examination.

I do not have all of the facts at this point. However, please know that I urged Police Chief John Perez and City Manager Steve Mermell to release and publish prominently, with all deliberate speed, all audio and video of the incident in the possession of the Pasadena Police Department.

The Pasadena Police Department will investigate the officer-involved shooting and facts that pertain to the shooting to determine if the shooting was within or outside of policy. The District Attorney’s office will decide whether the actions of the officer involved in the shooting were justified or not. The District Attorney’s office is the only agency tasked with making such a determination on criminal charges, unless the Federal Bureau of Investigation has an active role in investigating the matter.

City Manager Steve Mermell will engage outside professionals to review the findings of the Pasadena Police Department concerning the incident and will make the report public.

The investigations of the officer-involved shooting have already begun. They will take time and I am requesting that the processes be expedited, but thorough.

It remains my hope that the City Council will, without delay, swiftly adopt meaningful and real community oversight of the Pasadena Police Department.

Spectrum/Charter is hard at work crafting ways to petition the FCC to allow them to bypass the agreement that was made when Charter acquired Time Warner Cable.

Now the FCC appears to be paying attention and some consumer groups as well as some content providers are supporting the movement to block and prevent Charter from imposing data caps.

If you are a Charter/Spectrum customer take a few minutes to learn about another crafty move the company is trying to pull over on customers.

Don’t delay as Sept 2, 2020 is the current deadline for public comment.   There’s even a letter you can edit before submitting, you can always write your own as well.

Here’s a letter written by Phillip Dampier Founder and President of Stop the Cap!

This is the best directions for filing a complaint with the FCC.

You have until Sept 2 to file, but do it today. Let the FCC know that this sort of action by large corporations is not going to be tolerated.  See pubic notice here.

Call to Action! Tell the FCC “No” to Charter Spectrum on Data Caps!

A Memoir by Michael Cohen

This book almost didn’t see the light of day as
government officials tried to bar its publication.

“Judge Orders Cohen Release, Citing ‘Retaliation’ Over Tell-All Book.
A judge agreed that federal officials had returned Michael D. Cohen to prison because he wanted to publish a book about President Trump.”

“I make the finding that the purpose of transferring Mr. Cohen from furlough and home confinement to jail is retaliatory. And it’s retaliatory because of his desire to exercise his First Amendment rights to publish a book and to discuss anything about the book or anything else he wants on social media and with others.”

Alan DershowitzAuthor of THE CASE AGAINST IMPEACHING TRUMP

“Michael Cohen was sent back to prison as a retaliatory act over tell-all book about Trump, federal judge rules.”

Michael Cohen has released the cover and a 3,700-word foreword from his upcoming tell-all book, "Disloyal."https://t.co/ngYtc1nNsI

Known for her funky, soul-driven pop and commanding vocals, Gavin Turek takes the stage in the Skirball’s spectacular Taper Courtyard—a one-of-a-kind backdrop beloved by music fans across LA. Ethereal and crooning, Turek will give an intimate performance that harkens back to the very best of ’80s and ’90s R&B. Be swept off your feet as Turek stuns with new tracks and old favorites.

Halfway around the world, in a set specially filmed for Skirball Stages, ADG7 will captivate you with their energetic and playful performance. Described by The New York Times as a “giddy show band with all the trappings of K-pop,” this spirited nine-piece breathes new life into the sacred, shamanic, and secular gut (ritual music) and minyo (folk song) traditions of the Hwanghae-do region—now a part of North Korea.

More than a performance, this special will take you behind the scenes with the artists for a look at their musical processes, aspirations, and hopes for the future. In exclusive interviews, tune in as the artists reflect on the power of music to connect across cultures, honor generations past, and inspire perseverance during challenging times.

Can’t make the streaming event? No worries! Skirball Stages: Gavin Turek and Ak Dan Gwang Chil will be available to view on the Skirball’s YouTube channel through November 29, 2020.

Make it dinner and a show! Before settling in for showtime, swing by the Skirball campus to pick up a meal prepared by the Skirball’s culinary experts. Our take-home Skirball Suppers feature mouthwatering dishes inspired by Korean cuisine. View the prix-fixe menu and preorder starting August 4. Select recipes from the innovative August 29 menu will also be shared online for at-home preparation.

$42 per person
Pickup times are available from 5:30pm to 7:45pm leading up to the 8pm virtual concert. The availability of pickup times may vary as more orders are placed.
The those who RSVP will receive a link to the virtual online concert.  RSVP and receive content.

After signing up, you will receive an email with a link to our Zoom meeting; you will need to use the link to attend the meeting. We will send out the link on the evening of Friday, 8/7. Please make sure to sign up before then to make sure that you get the link! 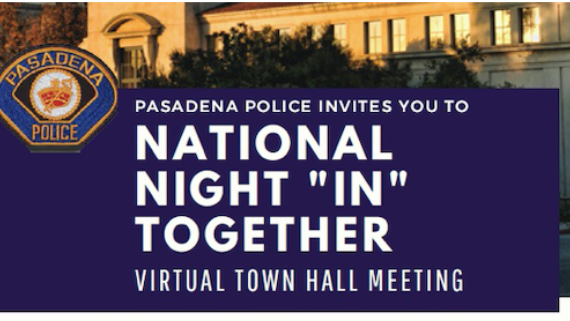 National Night “In” Together

Join Chief of Police John E. Perez, Mayor Terry Tornek, City Manager Steve Mermell, and Interim Fire Chief Bryan Frieders for an evening of information and dialogue during this year’s National Night “In” on Tuesday, August 4th from 5:00 p.m. – 6:30 p.m.  This virtual town hall will highlight the community’s commitment to crime prevention and dedication to promoting a higher quality of life for all of our residents.

Join our police and fire chiefs, mayor and city manager for a virtual town hall event. Space is limited, so sign in early. The meeting will highlight our community’s commitment to crime prevention and our dedication to promoting a higher quality of life for all residents. Meeting URL: us02web.zoom.us/j/82726840699 Webinar ID: 827 2684 0699 Dial-In option: (669) 900-6833