Introducing Amazon Dash Button: Place it. Press it. Get it.

Introducing Amazon Dash Button. Never run out of your favorite household products – just press it to get it.
https://amzn.to/1NDZf7N

Keep Dash Button handy in the kitchen, bath, laundry, or anywhere you store your favorite products. When you’re running low, simply press Dash Button and Amazon quickly delivers household favorites at the same low prices offered on Amazon.com, so you can skip the last-minute trip to the store. Request an invitation: https://amzn.to/1NzjyB7

Ladies and gentlemen…the Rolling Stones are back! The band has announced that they will kick off their new 15-city North American stadium, ZIP CODE tour, in San Diego on May 24 at Petco Park. The tour will make stops in Columbus, Minneapolis, Dallas, Atlanta, Orlando, Nashville, Pittsburgh, Milwaukee, Kansas City, Raleigh, Indianapolis, Detroit and Buffalo before wrapping in Quebec on July 15 at Le Festival D’Été de Québec.

Tickets for these dates will go on sale Monday, April 13. For ticketing information please visit rollingstones.com/tickets/.

“We are excited to be back in North America playing stadiums this summer! We are looking forward to being back on stage and playing your favorite songs.” – Mick Jagger

“We love being out on the road and it is great to come back to North America! I can’t wait to get back on the stage!” – Keith Richards

The Rolling Stones ZIP CODE tour will see Mick Jagger, Keith Richards, Charlie Watts and Ronnie Wood head back out on the road after their critically-acclaimed 14 ON FIRE tour in Asia, Europe, Australia and New Zealand in 2014. The iconic band will treat their generations of fans to special one night only shows, with a set packed full of classic Stones hits such as ‘Gimme Shelter’, ‘Paint It Black’, ‘Jumpin’ Jack Flash’, ‘Tumbling Dice’ and ‘It’s Only Rock ‘N’ Roll’, as well as special gems from their extraordinary catalogue.

The Rolling Stones ZIP CODE tour will be the first time the rock legends have played North American stadiums since 2005-2007’s A Bigger Bang Tour.

The stage design for the stadium shows includes a thrust that extends deep into the audience allowing the Stones to interact directly with their fans. Known for their ground-breaking sets and use of cutting-edge technology, the Stones’ set design will feature video screens and special effects that will enhance the high-octane experience of attending a live Stones’ show.

40+ beers & vegan eats on the grassy field of the Rose Bowl. Few things are better than 5/16. https://bit.ly/lavbfftix

The 6th Annual LA Vegan Beer & Food Festival will be taking place on May 16th at The Rose Bowl Stadium. There will be unlimited pours from 60 breweries with over 100 different beers to choose from. Get your favorite vegan eats from over 40 different food vendors. Enjoy live music and art while you hang out with your friends!

The 6th annual Los Angeles Vegan Beer & Food Festival will take place on The Rose Bowl infield and feature the best of L.A.’s craft beer, vegan eats, and live music. Upon entry you will receive your very own LAVBFF glass and enjoy unlimited pours from 40 breweries featuring 100+ different beers. We will also be hosting 40 restaurants and food vendors. General admission door time will be at 1pm. VIP admission includes separate entrance, early entry at 12pm, and access to the VIP lounge with exclusive pours. This event is 21 & over. Please note that food is not included in the ticket price.

Last year had a $80 VIP as well. Yes fee is high, Rose Bowl and CC fees in there too. That said, the VIP this year is indoors, AC, and multiple beers.

This event is 21 and over

We wanted to update our 2013 Pasadena area guide to dog friendly restaurants and eating establishments around the Pasadena area.

This is our 2015 guide, which will be updated as new locations are added, and unfortunately as some close.

These we are not sure about:
4. Malbec – Green St.

We confirmed that these are not dog friendly but do have outdoor patios.
2. Green Street Restaurant – South Lake – used to be

on Fair Oaks in Pasadena

In the Courtyard on Fair Oaks building.

Register on the site for email updates as the location gets closer to opening hopefully in the coming month. 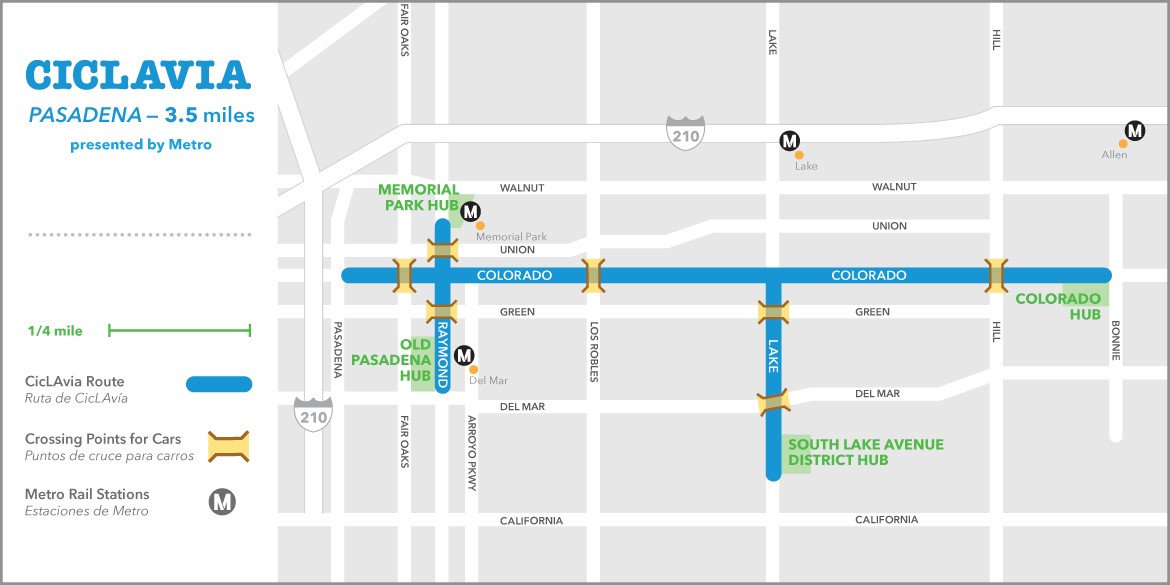 On Sunday, May 31, main drag Colorado Boulevard will be shut down from just west of Fair Oaks all the way to Pasadena City College, says a release from event organizers. The 3.5-mile route will branch off on some side streets (Raymond, Lake) on the way, and, of course, the Metro-sponsored event will have connections to both the Memorial Park and Del Mar Gold Line stations to maximize the day’s car-free potential.

Read more about it here

Pasadena has played host to parades, bike races and music festivals, and for the first time is opening its streets to the largest car-free open streets event in America. CicLAvia – Pasadena Presented by Metro takes place from 9:00 a.m. – 4:00 p.m. on Sunday, May 31. The city will lend its own charm and flair to CicLAvia as participants travel along Colorado Boulevard, and down side streets to parks and historic architecture using foot, pedal and non-motorized wheel power. Go Metro to CicLAvia, the event route will connect to the Memorial and Del Mar the Metro Gold Line Stations enabling participants to have a car-free or car-lite day.

CicLAvia – Pasadena Presented by Metro is the most walkable CicLAvia to date at 3.5 miles. The cozy distance will offer participants the opportunity to peruse and explore Pasadena’s business gems and cultural treasures. Spurs off the main route on Raymond Avenue and Lake Street will take participants to local parks. And CicLAvia’s new partnership with Kurios – Cabinet of Curiosities, Cirque du Soleil’s newest touring Big Top show, coming to southern California this fall, will give participants young and old a smile-inducing and awe-inspiring entertainment adventure.

The Pasadena route is made possible with a grant from Metro Los Angeles.

New to CicLAvia? Here are four things you need to know for May 31:

GROW GREAT TOMATOES
Saturday, 10am & 1pm | Sunday, 1pm | Under the Oaks Theater
Learn the basics of tomato growing at this lecture.

TOMATO COOKING DEMO
Both days | noon | Under the Oaks Theater
Learn some fresh new spins on cooking with this favorite from a Patina chef.

How’s the tomato garden coming along??

If you’re prepped and ready to go we have a wonderful list of seedlings to offer you at two sales in the LA area this weekend!
And if you planted after one of our other events, maybe you left a few spaces vacant? We hope so.

This weekend finds us at:

DESCANSO GARDENS in La Canada/Flintridge
https://www.descansogardens.org/
March 28 – 29
A screenshot or printout of our website presented at the gate gets non-members in for a reduced rate of $5 (reg $9)

More details at tomatomania.com and a class schedule for Descanso can be found on their site!

“Exploration and Engineering: The Jet Propulsion Laboratory and the Quest for Mars”

La Cañada Flintridge, CA – On Thursday, March 26, at 7 PM, Flintridge Bookstore & Coffeehouse hosts a talk and booksigning for Erik M. Conway, historian of science and technology at the Jet Propulsion Laboratory (JPL), California Institute of Technology, and author of Exploration and Engineering: The Jet Propulsion Laboratory and the Quest for Mars.

Although the Jet Propulsion Laboratory in Pasadena, California, has become synonymous with the United States’ planetary exploration during the past half century, its most recent focus has been on Mars. Beginning in the 1990s and continuing through the Mars Phoenix mission of 2007, JPL led the way in engineering an impressive, rapidly evolving succession of Mars orbiters and landers, including roving robotic vehicles whose successful deployment onto the Martian surface posed some of the most complicated technical problems in space flight history.

In Exploration and Engineering, Conway reveals how JPL engineers’ creative technological feats led to major Mars exploration breakthroughs. He takes readers into the heart of the lab’s problem-solving approach and management structure, where talented scientists grappled with technical challenges while also coping, not always successfully, with funding shortfalls, unrealistic schedules, and managerial turmoil.

Conway offers an insider’s perspective into the changing goals of Mars exploration, the ways in which sophisticated computer simulations drove the design process, and the remarkable evolution of landing technologies over a thirty-year period.

“No subject in the history of planetary science has been more publicly enticing than the efforts to understand Mars. In Exploration and Engineering, historian Erik M. Conway presents a very detailed, mission-by-mission discussion of Mars exploration since Viking. This capably told narrative captures the fascinating details of the Mars program at the Jet Propulsion Laboratory.” — Roger D. Launius, National Air and Space Museum, editor of Exploring the Solar System: The History and Science of Planetary Exploration

Conway is also the author of Atmospheric Science at NASA: A History.

We are seeking highly motivated, passionate and intelligent people who thrive working in a fast-paced environment to join our team. We encourage an environment of growth, whether you’re an intern wanting to learn and grow to the next level, a pastry line cook, or want to showcase your awesome customer service skills with the Front of House counter staff, we are looking for you!

Churro Borough is a Los Angeles-based dessert company, which first made its mark in the city by “tagging” the streets with the ORIGINAL hand-crafted churro ice cream sandwiches. Our new brick & mortar will offer a large selection of hand-crafted, small batch ice cream and sorbet flavors, along with seasonal paletas inspired by farmers markets’ fruits and produce, and of course CHURROS! We will also offer a small variety of pastries and desserts for grab-and-go items.

Please submit the following:
– Resume
– Contact info
– Position you are applying for
– Few words about yourself and why you want to work with us

COUNTER STAFF
– Great customer service
– Reliable and punctual
– Ability to work quickly, consistently, and efficiently on the counter line
– Ability to work some Back of House duties, when needed (such as frying and baking)

Job Responsibilities:
Counter Staff will be expected to maintain a positive atmosphere, greet guests, and take orders, as well as scooping ice cream, assembling desserts (shakes, ice cream sandwiches), making coffee/tea, working cashier, and some dish washing. There will be times when FOH will assist back of house with frying/baking.