Remember to Recycle Your Christmas Tree-Make it a Holiday Tradition!

Make sure recycling your Christmas tree is a part of your holiday traditions.  Recycling you tree is good for the environment and provides and important source of mulch that the City uses and gives away for free throughout the year. The following information will help make it easy for your to recycle your Christmas Tree. For more information, please contact the Citizen Service Center at (626) 744-7311.

Several city employees involved in scheme, including six placed on “administrative leave” according to City Manager Michael Beck, who he refused to identify. Why?  I would imagine that this scheme ran deeper and as Councilman Torneck said City Hall has a “long-standing culture of complacency”.

This complacency in the city is unacceptable, all departments need extensive audits.  All city residents and tax payers should be demanding a full accounting of all departments, especially those with the larger budgets like Public Works and Water and Power.

City of Pasadena Officials have published KPMG’s full audit as of Tuesday on the city’s website.

The City of Pasadena is providing a variety of documents and information to help keep the public informed about the arrest of a former City employee regarding the theft of public funds and steps that the City has-and will-take. The following links to documents are being provided.  As more information becomes available, additional postings to this webpage will occur.

Sunday Service Clip: What Kinda of Church We Got Going On?
Message: When You Pour, Make Mine A Double
Pastor Danny R. Wooten

Those charged and arrested thus far:

Danny Wooten was a Management Analyst IV in the city’s Public Works department and earned $131,621.87 in 2013 according to www.transparentcalifornia.com.  Wooten worked for the city for 12 years with the suspected criminal activity spanning over 10 years, between 2004 and March 2014

This from City of Pasadena Council Person

This is a sad day in Pasadena’s history. Today a former City employee was arrested for allegedly embezzling $6,432,810.98 over a period of eleven years from you and me, the residents of Pasadena.

I want to give you some background about this theft, and make you aware of a Special Meeting the City Council will be holding to discuss the issue and respond to the public.

Like many frauds and embezzlements, this was uncovered through a routine inquiry. Last May, the Municipal Services Committee was looking into the Underground Utility  Program  which is funded through a special tax (UUT), and places overhead utilities underground throughout the City. (The work on Hill Avenue is being funded by this program.) The Committee learned it would take around 150 years to place all the utilities underground and the Committee was evaluating whether this program should continue, or could perhaps be brought to a close at a logical point, and the UUT tax discontinued. It was through that discussion that a “Miscellaneous” account with a high balance was brought into question, and as staff investigated to respond to the Committee’s inquiries, the fraud was discovered.

Subsequently, the City Manager engaged KPMG, a company that specializes in forensic accounting. After investigating, KPMG determined an employee, Danny Wooten, had prepared and provided as many as 296 fraudulent invoices to the City on behalf of four entities with which he was affiliated and received checks totaling over $6.4 million in payment of those invoices. Mr. Wooten, who had already been terminated by the City for an unrelated matter, was arrested today and will be prosecuted by the Los Angeles County District Attorney’s office. While investigators do not believe others were involved, four employees have been placed on administrative leave pending further investigation.

The reported prepared by KPMG lays out very clearly how this embezzlement occurred and what Red Flags should have drawn attention to the embezzlement. That report will be put on the City’s Web page for every resident in Pasadena to examine. It is the City’s intent to put all information about this scandal out to the public as soon as possible. In addition, the City Council will hold a public meeting on Monday, January 5, 2015 solely on this issue.

I want to restore your trust in our Municipal Government. I will answer every question you have, and make every piece of information I have on the matter available to you. For more information you may go to www.cityofpasadena.net/invoiceinvestigation. You are always welcome to contact me directly on my cell phone 626 808 6158 or via the City Council Office number, 626 744-4742.

Brought to you by Enriched Farms

Caltech neuroeconomists have found that your ability to exercise self-control when deciding what to eat may depend upon just how quickly your brain factors healthfulness into a decision,

The Psychological Science study, “Dietary Self-Control Is Related to the Speed with Which Health and Taste Attributes Are Processed,” was authored by Sullivan and Rangel along with Caltech postdoctoral scholar Cendri Hutcherson and former Caltech postdoctoral scholar and visiting associate Alison Harris, who is now an assistant professor of psychology at Claremont McKenna College. Their work was funded by the National Science Foundation. – See more at: https://www.caltech.edu/news/cake-or-carrots-timing-may-decide-what-youll-nosh-45077#sthash.0cOK1T9D.dpuf

The Pasadena Police Department invites the community to join us this Friday December 26th., at 4:30 P.M. to 7:00 P.M., for a sneak preview of several of the 2015 Rose Parade Floats. Phoenix Decorating Company at 835 South Raymond Ave., Pasadena, is graciously hosting this special event. Cost is $25 per person which includes dinner!!! All proceeds directly benefit the Pasadena Police Activities League (non-profit) Hope to see you there.

The Pasadena Police Department invites the community to join us this Friday December 26th., at 4:30 P.M. to 7:00 P.M., for a sneak preview of several of the 2015 Rose Parade Floats. Phoenix Decorating Company at 835 South Raymond Ave., Pasadena, is graciously hosting this special event. Cost is $25 per person which includes dinner!!! All proceeds directly benefit the Pasadena Police Activities League (non-profit) Hope to see you there!

END_OF_DOCUMENT_TOKEN_TO_BE_REPLACED
Movie The Interview Released by Sony YouTube, Google, at 10am PST, #theinterview

Looks like it will be available on: youtube, xbox, and google play. $5.99 rental and $14.99 to own. Interesting it is NOT available on PSN.

Pervasive Language, Crude and Sexual Humor, Nudity, Some Drug Use and Bloody Violence

In the action-comedy The Interview, Dave Skylark (James Franco) and his producer Aaron Rapoport (Seth Rogen) run the popular celebrity tabloid TV show ‘Skylark Tonight.’ When they discover that North Korean leader Kim Jong-un is a fan of the show, they land an interview with him in an attempt to legitimize themselves as journalists. As Dave and Aaron prepare to travel to Pyongyang, their plans change when the CIA recruits them, perhaps the most unlikely candidates, to ‘take out’ Kim Jong-un. 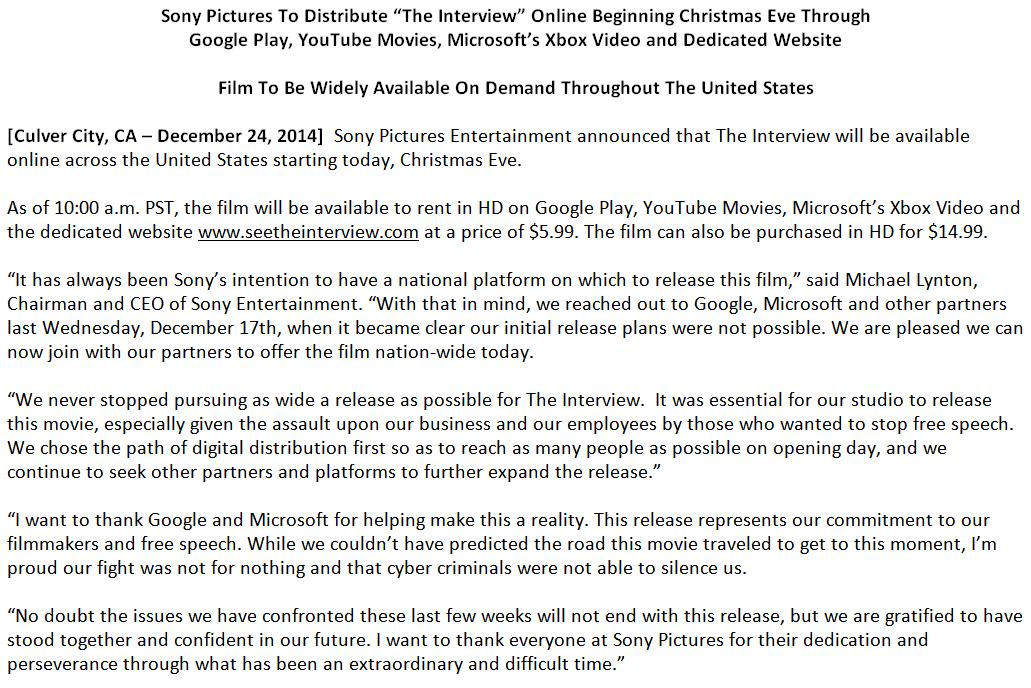 In addition to substantial savings, buying refurbished merchandise still offers the same great benefits that we offer for all of our products: your 100% complete Customer Satisfaction. We are so confident that you’ll be pleased with your purchase that we stand behind our entire line of refurbished electronics and merchandise. If you are not absolutely satisfied with your purchase, we offer our “Risk-Free, Just Because” Return Policy, which allows our customers to return any items purchased from A4C within the last 30 days for a full refund.

Reports are that the famous karaoke bar Dimples is set to close in mid January to make room for a large development that will reportedly include a Whole Foods Market. the Talaria Project is set to begin construction soon, on the vacant lot across from NBC and Clear Channel.

Talaria at Burbank is a premium residential rental community to be built in the heart of the Burbank Media District, across the street from NBC, Clear Channel and Warner Brothers, and a short distance from The Walt Disney Company and Providence St. Joseph Medical Center. The project is being proposed as the first LEED-certified green residential community in the City of Burbank. Talaria’s exclusive retail tenant is a Whole Foods Market open to all.

Talaria at Burbank is an eco-friendly, LEED-certified premium residential rental community to be built in the heart of the Burbank Media District!