If you have AT&T Internet U-Verse you may have experienced issues, but this morning it appears to be much worse than in the past.

Sites are not loading, sites are timing out, some sites are working.

Is AT&T throttling speeds? Or is this an outage affecting some customers and not others?

Errors such as:
The connection has timed out

or pages that only load text and no images.

update: Apparently the issues on Jan 27, 2014 appear to be DNS issues, that are affecting customers nationwide.

The issue has been ongoing for several hours and reports from many areas where AT&T Uverse service is available.

Some have reported that changing their DNS settings has resolved the issue, i.e. change to public DNS such as Google’s 8.8.8.8, which appears to be working.

Here’s a tweet search of users experiencing issues and a fix to the current AT&T DNS issues here:

If you are searching for a wireless camera solution with and have no need for DVR, then there are some options for realtime monitoring. If the option existed to record it could present better capabilities for these cameras. At a cost of $40-$50 these cameras offer video with audio. 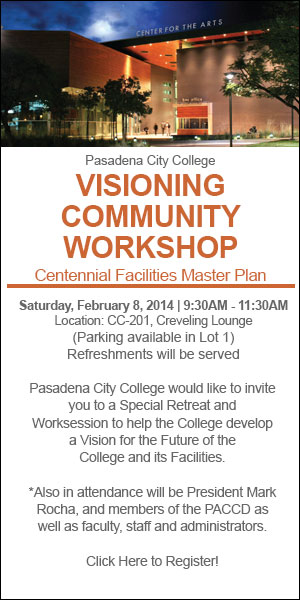 Pasadena City College would like to invite you to a Special Retreat and Worksession to help the College develop a Vision for the Future of the College and its Facilities.

Pasadena City College has served Pasadena and the Greater Los Angeles basin for the last 90 years and as the 100th Anniversary approaches, the College is beginning the development of an innovative and dynamic Facilities Master Plan. Higher demand for classes and degrees, new technologies and new ways to learn are challenging PCC to re-envision itself and its future. PCC wants to hear from its Community and College leaders about how it can maintain its level of education excellence and become a model for higher education.

This workshop is the kick off to a year-long planning process to align its Educational Master PLan with the facilities needed to better achieve the College’s goals to help cultivate students for the global 21st Century. The result of this process will be the Centennial Facilities Master Plan.

Three planning firms have been hired to help develop the initial conceptual Facilities Master Plan by this Spring. This workshop will give you a chance to meet the teams and give the College and the planning firms your ideas about the needs and opportunities for PCC.

*Also in attendance will be President Mark Rocha, and members of the PACCD as well as faculty, staff and administrators

Not a diet pill

The 2nd part of our interview with world-renown food formulator, Russ Bianchi… why the world needs LifeCaps.

Google’s Gmail service suffered an outage on Friday.
Users were greeted Friday by the message: “Your Gmail account is temporarily unavailable.

We apologize for the inconvenience and suggest trying again in a few minutes.” Google could not immediately be reached for comment. Google shares were down about 3%.

As has been covered in the press, Dodger Stadium is the site of the LA Kings vs the Anaheim Ducks NHL Stadium Series.

Crews are working on the finishing touches and the puck drops at 6:30pm with musical performances.

See the seating chart and the position of the field.

If you use stamps you may want to buy your US Postal Service Forever Stamps before Sunday Jan 26, 2014 when the rate increases from 46 to 49 cents. This increase is expected to bring in an extra $2 billion in revenue to the US Postal Service.

You can save a little more buying at Costco.

In the Mayor’s State of The City Address, Mayor Bill Bogaard mentioned that the project is slated to begin construction the coming year.  Citing the lack of hotels in the city and the addition of 800 rooms in coming years.

The Pasadena Star News reported last year the progress and status of the planning and development departments.

We look forward to the long term development of boutique type hotels, which translate into jobs and additional tax dollars for the local economy.