Free rides will begin at 12 noon and will last until midnight on Saturday, March 5.  Free rides were originally offered only until 4 p.m. Saturday.  Metro extended free ride hours to enable even more people to travel freely to and from opening day events.  Free rides will only be available on the Gold Line between East Los Angeles and Azusa. All other Metro Rail and Bus services will require regular fares.  Riders should be aware that Metro is still operating shuttle bus services between Pico/Aliso and Union Station due to construction work for the Regional Connector rail project in Downtown L.A.

Community station party events will have fun-filled activities for the entire family and will include live music, local business booths and food vendors.  Train service along the Gold Line Extension will begin at 12 noon. Please plan accordingly.  Station parking is on a first-come, first-served basis.  Community station parties will be held at following stations:

As a friend of the Rose Bowl we would like to offer you the opportunity to take part in an exclusive VIP pre-sale offer for OUE Skypsace at the top of the US Bank Tower. Please click below to be the first to purchase your tickets or find out more information.

Transform your view from California’s tallest open-air observation deck. OUE Skyspace LA is poised to be the premiere destination for panoramic, 360-degree views of Los Angeles.

The official Twitter account of Skyspace LA. In 2016 the new #SkyspaceLA will be California’s tallest open-air observation deck bringing 360-degree views to LA.

The Only Way to View LA

The all-new OUE Skyspace LA will be California’s tallest open-air observation deck and the premiere destination for panoramic, 360-degree views of Los Angeles.

From close to 1,000 feet above the city in the iconic U.S. Bank Tower, OUE Skyspace LA will honor the culture, community and people that make Los Angeles unlike any city in the world.

Politics are more social than ever. From political memes and ads on Facebook to new apps that pair users with candidates and issues.  From the local to the national level candidates are taking note,  pouring money and resources into staying socially relevant. Yet fewer young people are choosing to vote.  While young voters helped drive Barack Obama’s presidential election in 2008, those enthusiastic millennials  are now older and steadily declining in numbers at the polls. A recent Harvard study found that less than half of the 18- to 29-year-olds surveyed said they were following the 2016 campaign. And in 2014, just 8 percent of eligible 18- to 24-year-olds cast ballots in California’s general election.

Video from the event here:

Do millennials not care about the election process? Or is it something else? Research shows that millennials evaluate political candidates differently than earlier generations. Facebook, Snapchat, and Instagram are all platforms that millennials and younger generations grew up with and use to stay informed, share and organize around issues and interests. There’s no question that technology and social media are important tools for candidates if they want to reach younger audiences.

What’s the best way to get more young people civically engaged? What innovations are out there right now to help bring young people in? Is our current voting process outdated? How would you hack the vote?  We’ll explore these questions and more with KPCC’s Senior Politics Reporter Mary Plummer and her guests over pizza at startup hub Cross Campus in Pasadena. Be here for this discussion and meet some of the creators behind this new technology.

A new eatery in the South Lake Business District of Pasadena is in the permitting process.

The Arbour eating establishment is currently seeking a conditional use permit #6384, the hearing was held on Wednesday February 16, 2016 at 6pm.

City of Pasadena staff recommended that the CUP be approved in the staff report.

There are other similar establishment in the area, that there shouldn’t be an issue. The size of the space is 5,290 square foot with a 350 square foot bar.

The Arbour would join recent additions of Paul Martin’s and Del Frisco, among the already existing establishments.

If you own a LEAF this is surely a blow, why did Nissan not prepare for this sooner?   This is yet another sign  along with slagging sales of the Nissan LEAF that Nissan is not as committed to the EV as Nissan executives may want prospective buyers to think.

Having just had our Nissan LEAF batteries replaced due to the battery capacity issue, was a smooth process once the capacity dropped to the “required” 8 bars.  Nissan only offers a warranty on the replacement battery which is inappropriate for a key component which was replaced due to defective engineering issue.  Basically the warranty from Nissan is only the remainder of your original battery warranty or 12,000 miles/1 year which ever is greater, so basically the new batteries has a 1 year warranty.  Seems inadequate for a critical component which is supposed to last 5 years or 60k miles and was just replaced.

One more reason not to buy another Nissan product. I imagine other companies offer a new warranty on a “new” battery for an EV.

With the recent hack exploit of the Nissan Connect, yet another recent trouble for Nissan.

This is the letter we received from Nissan regarding the discontinuation of the NissanConnect EV.

This is the website Nissan has setup to answer questions.

One interesting note is that Nissan will require a TCU- Telematics Control Unit in order to connect to NissanConnectEV after 2016.  Nissan plans to cover a “substantial: portion of the costs for parts and installation of the updated hardware.

Apparently the TCU will operate on the 3G network which may face a similar fate in a few years as 4G LTE and 5G are the new technologies. 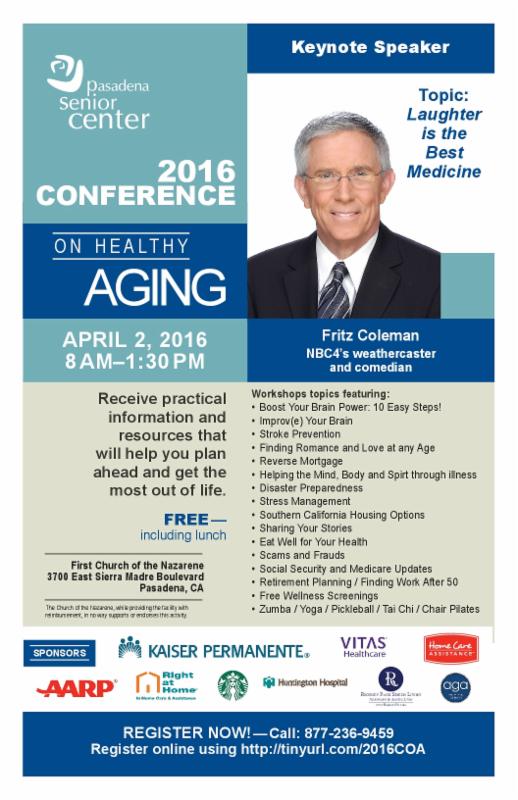 The 2016 Conference on Healthy Aging is presented by the Pasadena Senior Center. This annual event delivers a treasure trove of practical information and resources that will help you plan ahead and get the most out of life. The morning begins with our keynote speaker, Fritz Coleman, and is followed by two informational break out sessions. The times are detailed below. The workshop schedule below details specific speakers and the topics they have already committed to present that day.

The morning includes a light snack and delicious box lunch for all participants. Registration will be open February 1, 2016. At that time you can register by phone at (877) 236-9459 or online using the Register Online button above.