NEWS RELEASE A MESSAGE FROM PASADENA POLICE CHIEF PHILLIP L. SANCHEZ This afternoon, I informed Pasadena City Manager Steve Mermell that I will be retiring from my position as the Chief of Police, effective April 18th, 2018. The decision to step away from serving my community is a difficult one which took much deliberation and careful thought. For the past eight years I have had the honor of leading one of the nation’s finest law enforcement agencies, comprised of heroic men and women who serve with distinction in keeping our city safe. Putting on the Pasadena Police Uniform everyday has truly been a humbling experience. I am proud of the progress we have made as an agency during my tenure. We implemented various new technologies into our policing abilities including the Body Worn Camera program and enhanced community outreach with the Community Police Academy in both English and Spanish. We have increased the diversity of the Police Department to reflect the community it serves, all the while enhancing our responses to terror threats at large events, while working hard to deliver exceptional police service. My wife, Deborah, and I are blessed to have a large family and after a 38 year career in law enforcement, I look forward to spending time with all of them in the years ahead. I want to offer my sincere thanks to Mayors Bill Bogaard and Terry Tornek; to the members of the Pasadena City Council, to City Managers Michael Beck and Steve Mermell; and most of all, to the outstanding men and women of the Pasadena Police Department who will continue to serve this city with honor and humility. Thank you for allowing me to serve the City of Pasadena. 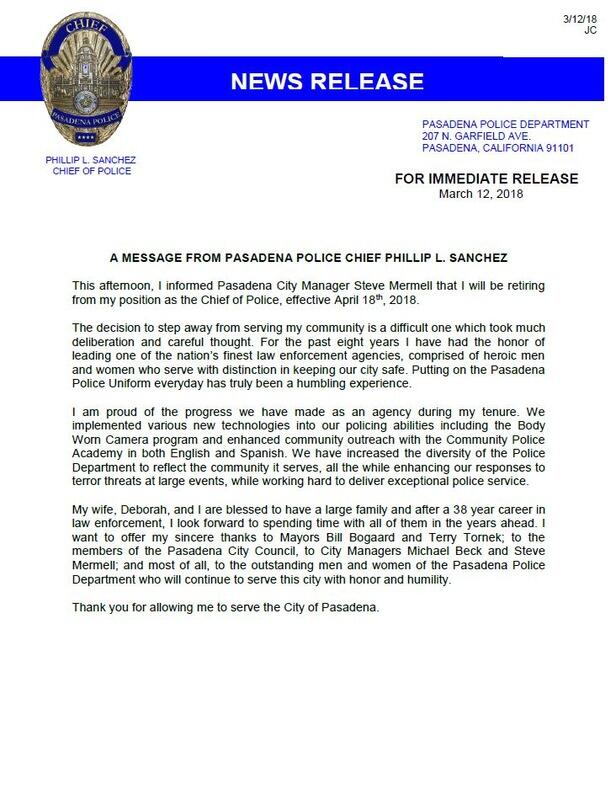