Madden NFL 13 – The Latest Game In The Franchise Finally Touches Down! 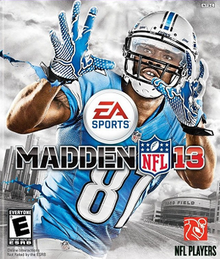 When you think of American Football you’d be hard pushed not to think of John Madden. There can be few people who have been so charasmatic and influential on a sport as this living legened and as long as the game lives on in our hearts and minds, Madden will remain a talismin  to its supporters. Similarly, the EA Sports game series that shares his name has been loved and enjoyed by sports and gaming fans ever since its first iteration all those years ago.

Now, after what seems like an age, the latest version, NFL 13 has been released to an eager public and it certainly doesn’t dissapoint!

Madden NFL 13    delivers the ultimate NFL experience. Whether teaming up with friends in Road to the Super Bowl, challenging your rivals in Madden Showdown, or building the ultimate NFL dynasty in Franchise mode, nothing gets you closer to Sunday than Madden NFL 13. Hear all-new commentary from CBS Sports commentators Jim Nantz and Phil Simms, become a Game Changer in 5 vs. 5, and collect all-new awards and special achievements along the way.

Need a bit of a hand mastering the game? No problem, EA sports have also released the Madden NFL 13 Official Game Guide . For just $14.99, you can utilise all of the very best hints and tips you”ll need to make it the most rewarding console based Football game you’ve ever experienced.

Whether this is your first foray into the world of Madden Football, or you a long time devotee of the series, you won’t be dissapointed and chances are you’ll be hooled for life!

View all posts by: Victor Caballero